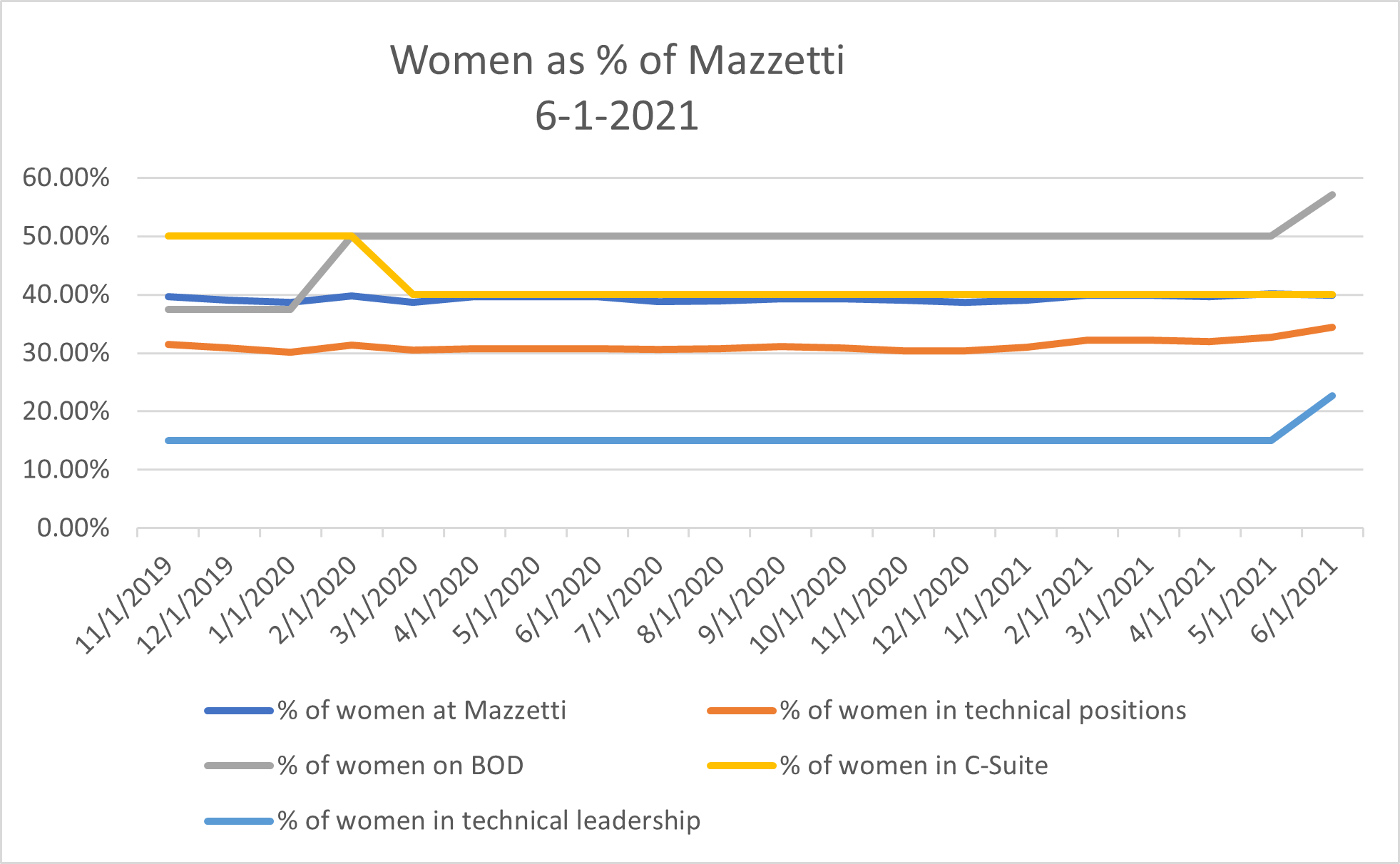 Due to some revisions to the company board and the qualifications for technical positions, June’s Women@Mazzetti numbers are showing an uptick in our number of women on the Board of Directors and in leadership and technical positions. In June, the W@M committee hosted a cross-office ‘speed dating” event to encourage people from different offices who don’t have the opportunity to work together to get to know one another better. With a robust group from across all our Mazzetti offices, we split into small break-out rooms to chat and learn about each other before switching to a new room and starting over. A list of questions was provided to help break the ice with fun topics such as where your first vacation will be after the pandemic, how many languages you can speak, and what some of your favorite work projects have been. The goal of this meet and greet event was not only to promote more interaction between our offices but also to spur new connections that could be beneficial for employee mentorship and professional development. We look forward to hosting more fun events like this in the future! 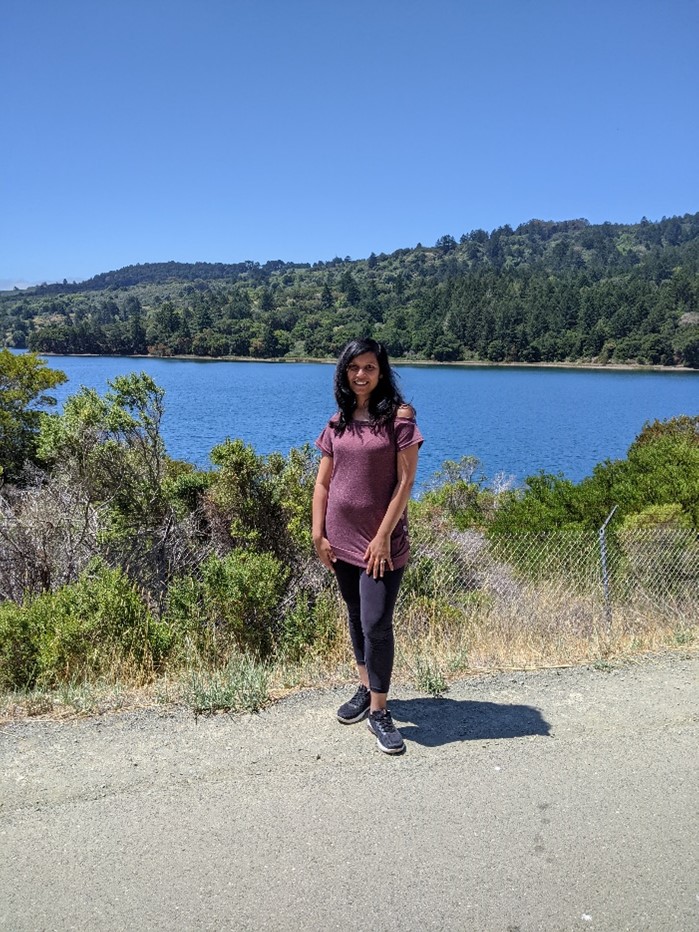 This month, the Women@Mazzetti committee is putting the spotlight on Anjali Wale, a senior electrical engineer and associate from our San Francisco office. While the past year has given us a newfound appreciation and admiration for all the parents out there who have been juggling home schooling or childcare and work, we found Anjali’s ability to juggle competing priorities particularly amazing!

Anjali’s path to electrical engineering started out with her love for math and science and her desire to be like her father who was an engineer. She started pursuing a degree in computer engineering at Purdue University, but quickly realized that wasn’t the path for her due to lack of interaction. She made the switch to electrical engineering and her first internship, which turned into a full-time position, was in the AEC industry and has now shaped her career path for the past 15 years. Following graduation, Anjali lived and worked for firms on the east coast and in the Midwest before moving to California.

As a new grad, Anjali remembers being intrigued by titles and mapping out where she wanted to be in a certain number of years. Over time, however, she has come to the realization that enjoying what you do and enjoying your coworkers means more than having a certain title. She remembers initially feeling a bit intimidated about speaking up in meetings, but those feelings started to go away as she gained more experience. In fact, she came to realize those feelings had no real merit because the engineering profession thrives on collaboration. Contributing to meetings helped her build her own confidence, create a good rapport, and learn a lot about the profession “on the job.” Anjali credits having great mentors – particularly when she was just getting started with a healthcare firm – which shaped her decision to return to healthcare design at Mazzetti.

Anjali enjoys the variety of work she performs as an engineer. While she likes the technical work, she also enjoys contributing to winning projects through her work on proposals and would be interested in managing a team or having more opportunity to mentor younger staff. She passed on the opportunity to stay at Purdue University for her master’s degree because she likes the practical, real-life application of engineering more than the theoretical side.

With a husband who is the VP of his own biotech start up and raising two young kids, Anjali’s days are always full and “work-life balance is essential.” She describes her husband as a supportive partner and says they share the same views on raising a family while holding demanding jobs and how to make it all work. Without a network of family nearby to help (the grandparents are in India), Anjali really appreciates the flexibility she has at Mazzetti to get her work done and not be chained to a desk from 8:00 to 5:00. That flexibility allows her to give her best self to each situation when it’s needed and use her time more efficiently. She said the pandemic opened her eyes to the fact that she doesn’t need to be in the office to get her work done and that “work and family” can successfully coexist. 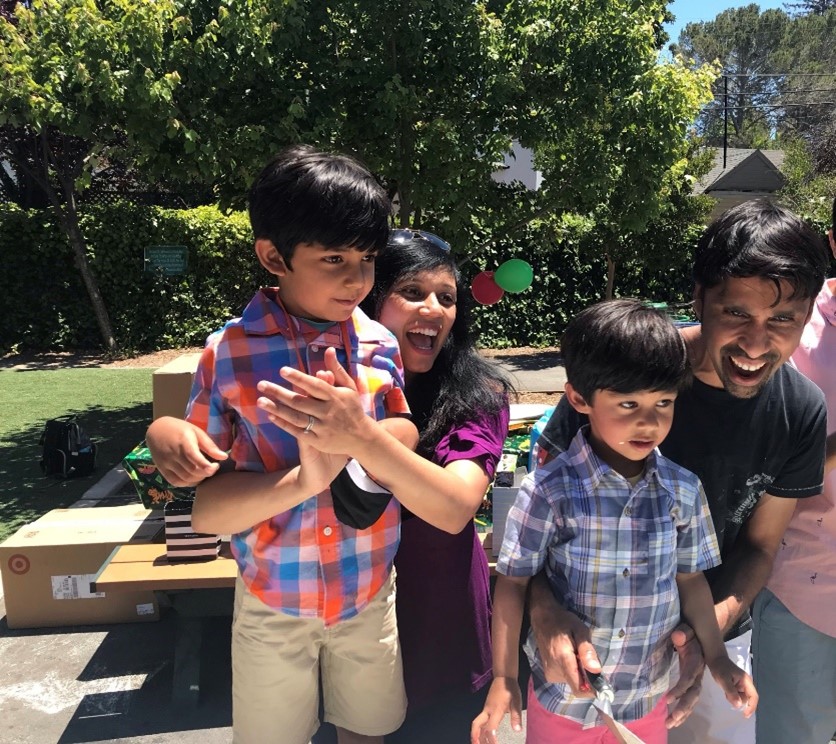 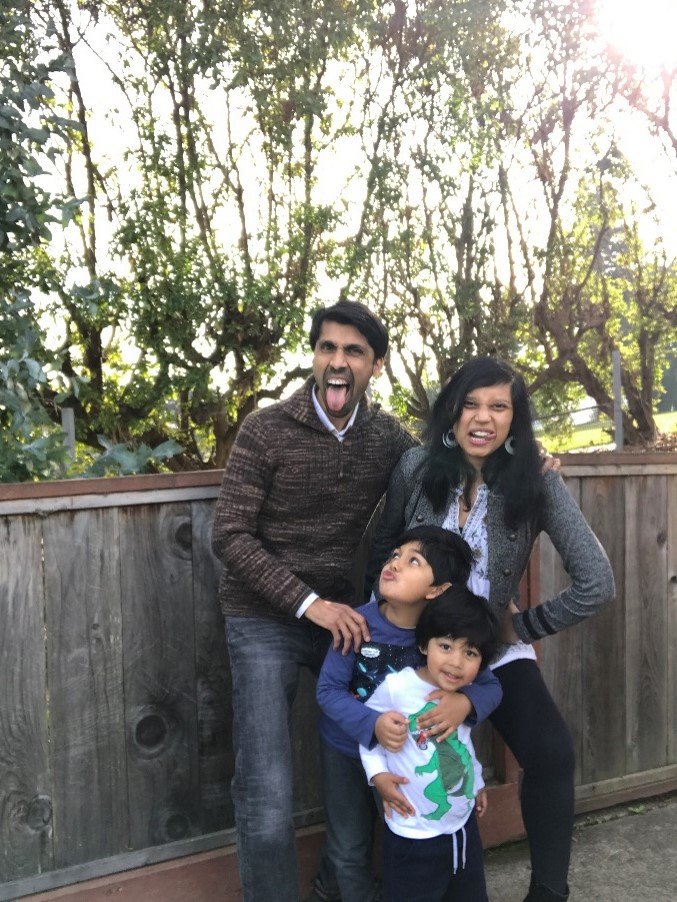 Her youngest son is now in preschool, which makes things a bit easier at home, and her oldest son is very interested in science and likes learning about electricity! He even asked her about fuel cells recently while the family was out for a walk! Anjali tells both her boys that they should love what they do and do something that excites them because they’ll be doing it for a long time.

As a woman and a person of color in a predominantly white male profession, Anjali says that she uses “being different” to her advantage and encourages other women to do the same. Instead of being intimidated by being different, she tries to find common ground with others to initiate conversations and welcome questions to break the ice. She says, “women are better at what we do because we have to work harder to prove it,” and “sometimes male counterparts don’t initially give you the respect you deserve.” Her approach has been to “work extra hard” to be over-prepared to do a good job. Anjali recounted a particular site visit that was initially uncomfortable because she was 6 months pregnant at the time and had to walk the job site with a group of male contractors. Using her approach, she was able to get everyone to focus on the work to be done and not on her capability to do the work because she was pregnant.

Throughout her career, Anjali has experienced several different work cultures.  At a former firm, there were a lot of younger people, but not a lot of women.  At Mazzetti there are a lot of women, which she thinks makes the culture more “open-minded.” She’s never had a female manager, but her experience has been that managers in firms with more women are more flexible because the mix of people (and the accompanying needs of people) are more diverse. Her advice to leaders is to, “be open-minded, be willing to listen, and be a good communicator.” Participating in a Meyers-Briggs personality test early in her career helped Anjali to “step back” and think of how her “brain works and what motivates her,” as well as learn a lot about her coworkers and managers. She said she was surprised to find out how much she had in common with her managers and people in leadership positions, but those of us who know and work with Anjali don’t find that surprising at all!

A big shoutout goes to our director of HR, Sue Rossberg, for writing our spotlight this month!