As we head into summer and temperatures rise, our Women@Mazzetti numbers are holding steady as they have since March. 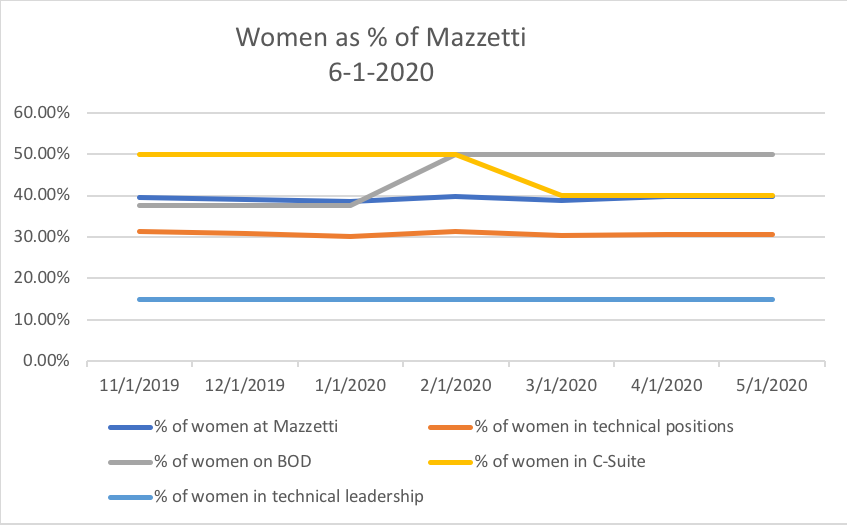 Though our group originated to promote gender equality within Mazzetti, the Women@Mazzetti committee realizes the importance of broader equality issues. We are striving to be better allies to the Black community and actively working towards addressing racial inequalities impacting our families, our communities, our country, and our world.

Towards this, we have started cultivating and sharing resources to help educate (including the history of racism in America) and raise awareness (including recognizing our own implicit biases). We have identified some of the social justice initiatives and entities, for which, people can make financial contributions, as appropriate. Compiled resources available here.

Last week we hosted an internal “privilege walk” to help not only raise awareness of our own privilege, or lack thereof, but also how we can further act on our awareness and privilege to make positive change. Mazzetti is also working towards forming a separate committee focused on racial and ethnic diversity. 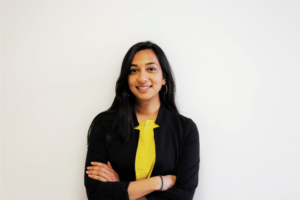 Disha Upadhyaya is an Associate and Senior Electrical Engineer in our San Francisco office. During her time at Clemson University in South Carolina (go Tigers!), she obtained an internship at a design firm that sparked her interest in the MEP industry. Upon graduation, she joined the firm full-time in the building systems department, only to discover she was one of only a few women in the firm. In pursuit of different project opportunities and increased company diversity, Disha decided to head west, landing in Los Angeles, California. She worked heavily in healthcare design for a couple of years before transitioning to science and tech work in San Francisco. Realizing her passion was really in healthcare work, Disha joined Mazzetti about two years ago. Mazzetti’s commitment and continuous pursuit to be the most women-friendly engineering firm coupled with the strong focus (and commitment) in healthcare were prime attractors. We could not be happier as she has become a great leader and an essential asset to our team!

Over the years, Disha has been exposed to a wide range of projects with varying challenges. Upon starting her electrical engineering career, she quickly found a mentor to gain competencies using Revit. Through this, she developed strong technical skills and became an electrical Revit expert fairly quickly.

Disha enjoys collaboration and project management. She has a passion for helping people work together more effectively and is fueled by social, productive energy.

Thus far, her favorite project was a 350,000sf lab office building with a highly collaborative project team of contractors and consultants. The general contractor on the project organized team building events, encouraging collaborative problem-solving, and facilitating a creative, positive environment.

This project was also unique given the female-majority design team.

I remember being in a project kick-off meeting with a client for a large lab/office building. After the meeting, the project manager told everyone to stop. She quietly said, ‘Look around. We’re all women.’ She said this was something she had never experienced before, and you could tell she was very happy to see it happen. I got to experience this five years into my career when it probably was twenty-five years for her. That moment really put into perspective how far women have come in this industry and the path women leaders have paved for all of us that follow.

Starting her career as one of the only female engineers at her firm, Disha has gravitated towards companies with more women. She is happy to see more women in the industry and has found a supportive environment at Mazzetti.

Disha believes that closing the gender gap in the AEC industry starts with, “having more women in higher leadership roles and giving women the opportunity and tools to succeed within the company. Women role models and mentors will give hope and confidence to the next generation of women leaders.”

Disha is now prioritizing how to be a better role model and mentor for younger women entering the industry. She also believes that everyone should have a mentor, both internal AND external, at every step of their career.

We hope Disha’s story is a source of inspiration and hope for female engineers. She inspires us daily.